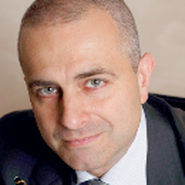 Riccardo Rovatti received his M.S. degree (summa cum laude) in Electronic Engineering and his PhD in Electronics, Computer Science and Telecommunications from the University of Bologna in 1992 and 1996 respectively. Since 2012 he is full professor of Electronics at the same university. His interests are in the theory and application of mathematical statistics to signal processing in Information Engineering. He is the author of more than 300 international papers and 2 volumes (H-index: Scopus=28 Scholar=58 WOS=23). He is an IEEE fellow and has been ans Associate Editor of the IEEE Transactions on Circuits and Systems - I. From the IEEE Circuits and Systems Society he received the Darlington Award in 2004 and the Guillemin-Cauer Award in 2013. He edited the May 2002 special issue of the IEEE Proceedings "Applications of Non-linear Dynamics to Electronic and Information Engineering” and the September 2012 special issue of the IEEE Journal of Emerging and Selected Topics in Circuits and Systems "Circuits, Systems, and Algorithms for Compressive Sensing".
Adapted Compressed Sensing for IoT Applications:

Abstract: Can compressed sensing effectively yield optimized means for signal acquisition, encoding, and encryption, either in analog or digital circuits and systems, when implementation constraints are considered in its realization?

The reason why this question is important is that compressed-sensing (CS) has been intensely discussed in the engineering community for more than a deacde as a hot research topic, gathering a great deal of effort from a large community that unites scientists in applied mathematics and information theory, as well as engineers of analog/digital circuits and optical systems. Yet, several investigations have been dominated by a few misconceptions that somehow hindered the application of this promising technique to real-world systems.

The first concept is that optimization and adap^tivity are fundamentally pointless since CS is Born as a universal technique that cannot be significantly improved. The second is that even if one wants to optimize CS, the degrees of freedom to do it are not ther, since it is technique that spreads information so uniformly that no criteria are able to tell important parts to emphasize from less important parts to neglect.
Both concepts are grounded in fundamental mathematical results that are indeed the pillars of CS and are indispensable pieces of the formal construction on which the whole discipline relies. Regrettably, strating from formally true theorems, the folklore has sometimes derived misleading design guidelines.

The idea that adaptivity is useless, often indicated as universality, has its roots in the seminal papers originating the very concept of CS and in other later information-theoric results. In the original setting, such an idea is extremely important to put CS in the right perspective and give it the full dignity of an acquisition method with general applicability.